Lately I’ve been thinking about when I put out my very first album seven years ago. I just can’t believe it.  Seven whole years; damn.  I decided to call it Manifestation as it truly proved to be this sonic carving out of almost 10 years’ worth of dreaming about putting out an album.  Furthermore, it was my unique, little way of conveying the cumulative thoughts and feelings that I’d pent up for years.  You see, I was a late-bloomer in every sense, which I think explained why I questioned my sexuality for so long.  I was also really hesitant about even just kissing girls.  Also, when I wrote that record, I was using drugs.  In fact, mentally, I celebrated drug use when I made this album (and that came through, in my opinion, very clearly in my lyrics, as the distributor demanded I place a parental advisory on it!). 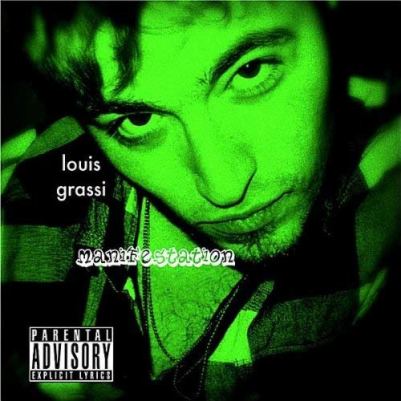 The songs are not bad, though.  I actually crafted this record after indie singer Liz Phair’s early stuff.  It was very lo-fi.  I played all the guitars and did all the recording myself, so there are many spots that sound rough and even flat-out off, but I didn’t care.  Well, I probably did at the time, but the bulk of the record’s acoustic asymmetry was the result of general inexperience and being technically quite green.  But that’s okay.  I think, the older I become, I appreciate more and more how rustic and obtuse my debut album is.  The song I wanted to share with you is called Steroids.  (There are two songs on the digital ‘EP’.  The title track is of course first, which you can go right to, in case it’s not shown initially.)

I wrote it about experiencing a melancholic depression that actually worsened with each antidepressant and/or anxiolytic that I was prescribed.   See, I’ve always been somewhat sensitive to medication in general (don’t laugh!), and very difficult to treat, as a result.  I experienced many unpleasant side effects from so many drugs and after even just a little while, I started to feel like a psychotropic guinea pig.  This song alludes to drug use, but not in the way you’d expect.

I think one of the major factors of my addiction was my treatment for clinical depression.  I now realize that I should have just asked to be referred to a specialist, as opposed to having my regular family doctor treat me, who truly didn’t have much training at all in psychiatric medicine.  I also should have gotten myself a therapist or counselor right away.  I should never have relied on just a pill for relief, as it permanently altered my natural self-betterment instinct.

This site uses Akismet to reduce spam. Learn how your comment data is processed.